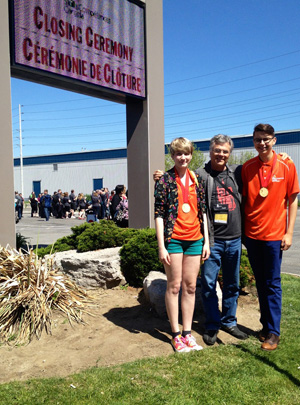 Michael Stevantoni and Annabelle Foss, enrolled in PRDFS’ intensive five-month film program, took home the gold in Toronto in June 2014 for their winning film, “Endless Possibility: What Can You Become?”

Previously, they beat out 15 teams from across British Columbia on April 9 at a trades-based event held in Abbotsford, BC. (The annual competition is held by Skills Canada, a national, not-for-profit organization that promotes careers in skilled trades and technologies to Canadian youth.)

Before creating their film, Michael and Annabelle received a theme to be used as their subject. They were asked: “Everything you post on social media impacts your personal brand. How do you want to be remembered?” They had six hours to complete a two- to three-minute film.

Before their win in Toronto, Michael and Annabelle won gold in the provincials. Earlier in the year, four students from PRDFS were paired at the regionals, held online,winning gold and silver.

“This kind of accolade keeps the students inspired, giving them the feeling that they can do anything,” says PRDFS director Tony Papa. “It really brings their skills into play. They are doing a great job.”

This latest award continues a tradition of student success at Powell River Digital Film School, which is in its seventh year. Its students have won awards at both the local and international level and some have had their films screened around the world.